Skip to content
HomeCan a part of Filipino culture come back to life?

Our trip today into Graphic Literature takes us to Komiks. We could venture back to days when pictures and words were put together and people now call them cartoons or comics or as I prefer, Graphic Literature, however I want to jump ahead maybe 30 or so years. My goal today is to see if we can go from the past to the present and connect the artists and writers along the way.

It’s after the Spanish-American War and there is some American influences filtering in.1 On January 11, 1929, Liwayway2 magazine published a character named Francisco Harabas, better known as Kenkoy3. Created by writer Romulado Ramos and the man who would become known as the father of Filipino Komiks, Tony Velasquez (Oct. 29, 1910-1997)4. 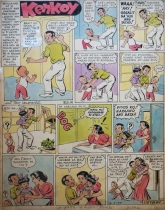 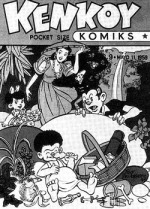 A little about Kenkoy. For one thing, the character is such a part of the culture the word kenkoy is actually an official part of the Filipino language now  meaning joker or jester. That should tell you something of the character himself. However, his life as a bachelor did not last forever, he eventually marries Rosing, a very classy and classic woman of the Philippines. The two remind me of Dagwood and Blondie in their differences of appearances and overall demeanor, created in 1930.5 With seven biological children and one adopted mute, but wily child later they were a happy, if not crowded, family.

Kenkoy is said to be the originator of Taglish6, which is English and Tagalog7 mixed as a language, you may notice it on social media if you know anyone from the Philippines.

A sad note  about Kenkoy. During the Japanese occupation of the Philippines in WWII, Velasquez was forced to use Kenkoy as a propaganda tool. He refused but was convinced by the then Philippine President to use it for the promotion of his health program instead of war propaganda. I suppose it served the same purpose.8

Velasquez was the mentor to someone I found very interesting. As I have of others in the southern hemisphere on the other side of the earth.

Mars Ravelo (Oct. 9, 1916-Sept. 12, 1988), was an illustrator and creator of great note.9 Ravelo wore many hats through his Komix career and became known as the “Father of Filipino Komix Superheroes”. I guess you can see why I am interested.

I want to mention two characters. One with a bit of conflict about her history. Darna, originally named Varga.10,

“You know I thought of creating Varga as a counterpart of Superman. Male on the part of the Americans, female on our part. Isn’t that okay?”~Mars Ravelo11

Varga  was created just before WWII broke out, around 1939.12  Some say Darna is a rip off of Wonder Woman who first appeared December, 194113 in DC Comics14. Darna’s alter ego is the mortal Narda. For one to become the other they must shout the name of the one they are not. The power to do so in the original origin came when a white stone crashing to earth from the planet Marte was swallowed by Narda to keep it hidden from her friends. With the change between characters being by the shouting of a name, inspired by Captain Marvel (1939), Revelo’s claim would seem to hold up.

Then we have Captain Barbell, May 23, 1963. I have to say this one has an interesting origin. Revelo’s openly spoofed Komik of Captain Marvel, who is now known as Shazam, due to legal issues.15 With powers given to a mortal through a golden barbell while shouting the words Captain Barbell.  I know it sounds a little cheesy but the powers are given to various people over the years and is quite interesting. Revelo had not intended for the character to be quite as heroic as it turned out to be, but the popularity forced his hand. And it took me about as long coming to this point of writing this part to get the rhyme of Captain Marvel and Captain Barbell. Don’t hate me because I am slow, hate me because I am beautiful. Okay, so I have a sense of humor.

Mars Revelo was a writer, editor and more, but he needed someone to be his artist.

Enter Nestor Redondo (May 4, 1928-Sept. 30, 1995). Oddly, or funnily, Redondo studied architecture when he was young.16 Why odd or funny? I’ve found this to be true with many Graphic Literature artists before. Many writers and editors have said it seems to be a plus in their backgrounds and detail work. But that’s perhaps for another article.

Why the love of a career in Komiks, with possibly check to prayer to check life ahead? Blame his father who would would bring him American comics. An addiction began for titles such as Flash Gordon and Captain America as well as Buck Rogers and Superman. Little did that boy or his father know what was in the future.17

Then it happened. Mars Revelo came calling and Redondo drew the first issue of Darna. You’ve seen his work above on Darna. Now here are some other pieces. Notice the work commissioned for the promotional comic version of the MGM movie Quo Vadis. The movie studio wanted Revelo to come to the US to work for them after seeing his talent, but he didn’t think he was ready.

But the Philippines could not hang on to Nestor for much longer.

Through the talent and popularity of fellow Filipino artist Tony DeZuniga, Nestor Redondo and several of his friends came to the notice of DC and Marvel.18 You can call this the Filipino Invasion.

Redondo worked on books for DC such as Phantom Stranger and Swamp Thing. As well as Red Sonja and Savage Sword of Conan for Marvel Comics.19

What he was most proud of or perhaps most passionate about was his work distributed by Open Doors20, a Netherlands-based organization. Being very religious he worked on beautifully illustrate stories of the Bible to be distributed to countries and areas where the Bible was restricted. 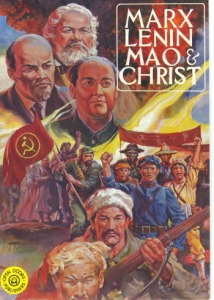 After the mass exodus of so many Filipino creators it’s difficult to make the connections from Filipino to Filipino as I have wanted to. In part this is because so many left in 1972. Why did so many leave at that time? September 21, 1972, Ferdinand Marcos, nearing the end of his term as president, declared martial law.  Things got bad.

“From what I remember, the local komiks companies set up their own Comics Code (but they were a self-governing body), just so that the government won’t get involved and censor all their works. But just like the Comics Code, they did restrict stories that showed too much horror, sex, and violence. Which, could be, partly the reason why our horror komiks artists looked for greener pastures and found it in the US market.”~Budjette Tan of Trese

Much like other countries where the government takes a strangle hold on any type of media that may influence the population, the comic book industry suffers greatly. If that hold lasts for a long time, decades even, a generation of culture does not inherit a long standing tradition. That’s what happened in the Philippines. Then Komiks became mostly photocopied and stapled together by the creators themselves and sold by the creators as well, many depended on the various conventions that are held each year.21

But now the industry requires greater quality to gain an audience. They all expect Marvel and DC quality.22

Now there is an effort to revitalize and bring the industry back home. In every aspect of visual entertainment you will find Filipinos, Pinoys. That’s paraphrasing Whilce Portacio. If you are a comic book fan anywhere in the world you very likely know this man’s name.

Born in the Philippines, but with a Navy dad he bounced or bobbed around until finally settling down at the age of about two and growing up in San Diego, CA. That’s where at the age of ten, his neighbor’s wife made it possible for Whilce to come into possession of her husband’s comic book collection and Whilce became a student of Jack Kirby and Neal Adams through books he never would have had otherwise.23

How did he make it to the big time? Through the help of another? No. He attended his first San Diego comic book convention, showed his samples to Marvel Comics editor Carl Potts24 and he was next inking Alien Legion25. The best I can tell, the original series.

Then came inking Longshot. Then Punisher. In an video interview Whilce talks about how he got his shot to become a penciller, the guy who does the drawing the inker inks over. He said he would ink the Punisher then flip the sheet over. You have to understand the sheets are huge for working on and then shrunk down for printing. He would then draw his on pencil work on the back. While the editor of Punisher would be holding up the page to check out the inking, the assistant editor would see the pencils and say, “Hey, look at this.”

X-Men, Iron Man, and others. you name it he did it. Then he was one of the magnificent seven that started Image Comics and worked on books like Spawn. Not big enough, how about Batman? Oh, and if you don’t know who Image Comics is, think where  The Walking Dead began.

That’s all great and good but the main reason I mention him today is his efforts to bring pride back to the art form in the Philippines. To do that he has partners who will be helping to back a studio system in the Philippines with Portacio acting as art director.26

I can imagine who the backers are. His thoughts are the Philippines could be the next Japan for many aspects of the industry from comics to animation. One advantage is the Filipinos already speak English and tell stories in English.27

He’s bringing a culture back home.

One thing Whilce said way back when in an a show hosted by Stan Lee when asked about when he knew he wanted be an artist he said the first grade. And here is the best part of why. The teacher had given the class paper and crayons. As she went around the room she told each student something like that’s nice, and then would ask what are you drawing? When she got to Whilce, she said, “Oh, did you see the Saturn V rocket launch yesterday?” It clicked. She knew what he had drawn. Yes, a teacher gave him confidence with just a few words.

15 thoughts on “Can a part of Filipino culture come back to life?”