Wanted to thank the few that noticed I as MIA the last few days. It was much appreciated. I have order to the Emergency Room by doctor after some tests were done for some fluids an antibiotics and ended up there for three days.

Turned out to be worse than anyone thought. Still almost as sick but on medications and the like for now.

Blogging will be light for the time being.

Again, much appreciation to those who sent messages of concern about my health. You know who you are.

Isaiah Austin has Marfan Syndrome and won’t be able to play professional basketball in the NBA. That dream is over. But due to his talent and popularity he has many opportunities to remain in the sport he loves from coaching at his alma mater to a job with the NBA once he finishes school. 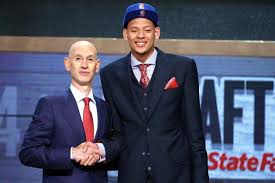 You’re wondering why you should you care, right? Ronovan doesn’t write about sports. Keep reading. How often do I not have a madness to my method?

“About 1 in 5,000 people have Marfan syndrome, including men and women of all races and ethnic groups.”-marfan.org

Now take a look at what Marfan Syndrome is:

“Marfan syndrome is a genetic disorder that affects the body’s connective tissue. Connective tissue holds all the body’s cells, organs and tissue together. It also plays an important role in helping the body grow and develop properly.” “Some Marfan features – for example, aortic enlargement (expansion of the main blood vessel that carries blood away from the heart to the rest of the body) – can be life-threatening. The lungs, skin and nervous system may also be affected. Marfan syndrome does not affect intelligence.”-marfan.org

For something most of us that has never heard of it, we can tell by that simple blurb this is a very serious disorder.

First of all, don’t think I am knocking Isaiah Austin. He didn’t ask for Marfan or the opportunities coming his way. That’s not it. Now that he’s drawn attention to Marfan I want to draw attention to another side of it.

Meet ‘M’. She’s not a superstar yet, well not to the world but she is to those who know and love her, but she is a competitive athlete. She’s been in competitive cheerle 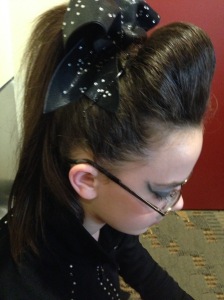 ading for most of her life.

Some don’t realize how tough competitive cheer is. ‘M’ has been a flyer. Meaning she is the one that is thrown in the air and just prays she is caught. She has to spin and do all sorts of things while up there and still find her mark on the way down 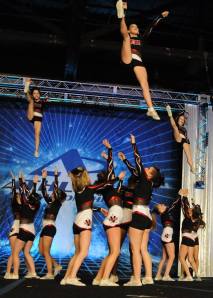 while trying to stay in sync with the other flyers.

On top of that she also does the gymnastic tumbling and has to be super strong in her core, abdomen in order to stay stiff as a board while standing up with people holding her in the air. Or how about you have to support someone as they jump over your head while you are in the air? Think it’s easy? Try it. Plus she also has to hold others in the air while she is up on peoples hands because she is so strong. You know that person in the middle of all those people up in the air that others are hanging onto? That’s ‘M’.